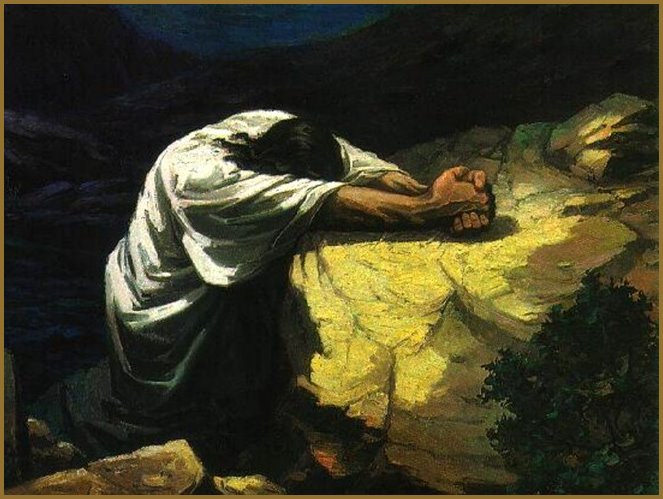 Obedience is necessary in times of hardship, as much as it is in every other area of life.  Jesus anguished in the garden, not because he did not want to go through with what his father asked of him, but because he feared he might not. When Jesus said, “Not my will, but yours be done,” he was asking his father to help him be obedient with the burden his father had placed on him. He longed to do his father’s will. John 4:34 “My food is to do the will of him who sent me, and to accomplish his work.” John 6:38 “For I have come down from heaven, not to do my own will, but the will of him who sent me.” We know from Philippians 2 that Jesus never strayed from this one mission, nor did his passion for it diminish. However, this was not without a struggle. Philippians 2:7 tells us he was, “obedient to the point of death, even death on a cross.” Why does it not say he was faithful to the point of death? Why obedient? In the garden, Jesus was not asking God to remove the prospect of dying on the cross, but asking God to give him the courage, obedience, to face it. He anguished that he might not go through with it as the Son of Man. (See Oswald Chamber, My Utmost for His Highest, April 5)

I’ve suffered four harsh experiences in my life. Child depression, and three members of my immediate family suffering through life-threatening cancer all challenged my claim to love and follow Jesus. Beginning with my childhood experience, I was conscious of the need to accept what God was asking of me. The option to rebel existed as no less real than my choosing a particular path on a journey I might take. The prospect to disobey was as real to me as it must have been for Jesus in his anguish of not having what it takes to go the distance while in the garden. When my youngest son was diagnosed with Burkett’s Lymphoma cancer in 2006, this third burden on my shoulders nearly forced my previously open hands to ball up into a fist. The temptation to shake my fist at God was all too real. Again, this heavy burden forced me to fall to my knees, and I found myself pleading that God would give me the grace to be obedient. Disobedience would have meant not accepting the burden, and would have resulted in bitterness and refusal to lean on and trust in Jesus.

During a prayer at my oldest son’s funeral the pastor referred to what our family was going through as an, “unwelcome privilege”.

Suffering becomes another opportunity for us to tell Jesus we will trust him. We acknowledge that he trusts us with what he is placing on our shoulders. Our longing, then, is to be obedient with it.

Sadly, I meet too many who fail to see what God has given them as an unwelcome privilege. An unwillingness to accept what God has placed on them can lead to unimaginable brokenness, and loneliness. Unfortunately, by the time I meet some of them, the hardness of their hearts makes them deaf to the call to obedience. Yet the gospel is so powerful, as we saw with Peter following his denial, Jesus continues to call us to experience the renewal that comes with obedience. This is why when I counsel a hurting couple whose marriage clings by a single thread, I urge them to first repent, then confess their sin toward each other and toward Jesus, and then embrace the healing and cleansing that comes as we meet together at the foot of the cross.

Suffering always pits us against one of two tensions. Our will, or the will of the One who redeemed us. Not, my will Father, but your will be done.

Yes, it might be harder, but it’s the only path that leads to true health and life.

What are you going through right now? Are you obedient with it?

Dear Lord, I don’t like what you are asking me to go through. Sometimes the burden weighs so heavy I can barely manage it. I fight off the impulse to be angry at You for putting me in this position. However, the prospect of being alone scares me. The idea of being disobedient right now, terrifies me. Please, help me to be obedient during this time of suffering. I want to live by your will, not my own. Thank you for the example of Jesus, who in the garden experienced everything and more of what it is like be human. My greatest fear is to give up now when you have been so faithful and trustworthy in the past. My greatest fear is that I would not go through with what you have desired for me. Grant to me the courage to be obedient. -Amen