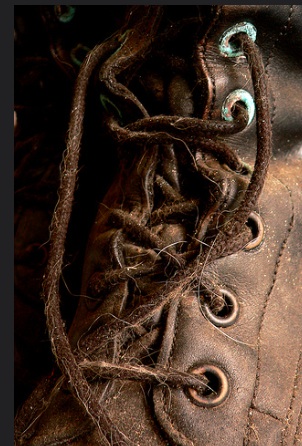 When I was in fourth grade someone stole my leather boots. They were not ordinary boots. The leather that wrapped and tightened together to form the boot had that intentional worn out look you see today in something new meant to look old. Some refer to it as “new old”. The boots reached well past my ankles, halfway up to my knees, in fact. Nine copper circle holes welcomed the careful lacing of thick brown string as the leather tightened against my ankle with each pull.  I wore those boots proudly. They might look worn. I knew better, but the secret would remain mine. The downward glances of other students filled me with an air of confidence. I refused to take off those b

oots except for at night, and one other time. At night the boots sat on the floor, my hands resting protectively over them during sleep. The other time I dared remove the boots was the day my boots were stolen.

Six of us wanted to hike a rugged hour up a creek to a waterfall. From the school campus the falls seemed imposing. Close your eyes, and you could hear its roar droning over the far less impressive sounds of clucking chickens and playful children. Up close the falls were even more imposing. There, as you stood daringly near the spot where the rush of water met the stubborn boulders, no other sounds could be heard.  Half way up to the falls, while bounding over boulders, slipping into the strength of the river, I knew I could no longer wear the boots. A native guide, assigned to us and required by school policy, insisted we place the boots behind a bush. I reluctantly handed them to him giving in to his assurance that the boots were safe where placed, and that he would retrieve them for me on the way down.

We finally made it.

For the next two hours I lost myself in the fun of jumping in water, daring each other to strip down into our underwear and even daring each other to edge close to the pelting water against our backs. We had the time of our lives. The sun began to edge closer to the rim of the mountain. With it, the light began to gradually dim. We pleaded for the sun to stand still, but the roar of the falls seemed to drown out our pleas. It was time to go home. We laughed when one of the boys had lost his trousers. He would have to brave entry into the campus without being seen by “the girls.”

As the fun faded with the sun, I began to think again about my boots. The tight feel of the leather against my ankle, the ritual of lacing through nine copper rimmed holes made me smile. Reaching the area, the guide could not find my boots. He appeared confused and genuinely concerned. I returned without my boots. I held back my tears and my anger. I returned to the campus, deeply sad. My confidence was gone. Eyes no longer looked downward in admiration. I tried to forget about the boots.  I tried to move on. A week later, anger raged. Emotions spun. A young boy with small capacity to manage those emotions tried to become a man, but was too scared to. The guide who had taken us to the falls was bigger than me. He also scared me. Scared the other boys too. It happened like this: I woke up at dawn trying to ignore the empty spot once owned by my boots. Passing by my window was the early morning silhouette of a man walking across the soccer field. I normally would ignore the movement. It happened most mornings. What caught my attention was his confidence. He strode as one who owned something, and as one who owned something better than what others owned. My eyes looked downward. To his feet. He was wearing my boots. He had not forgotten where they were hidden. A week ago, when he had returned us to the campus, he had rushed back and taken them for himself. There was nothing I could do about it. I was just a boy.

I see a lot of men today, grown men, who walk around as though they have had something stolen from them. They were once children who laughed, and joked with their pals, splashing water, giggling and daring to not cry as the place where the rush of water meets the boulder instead pelts bare backs. I see men today who once loved simple things, like a pair of leather boots. But now their joy is gone. Stolen by an enemy who loves to rip love and laughter away and replace it with restlessness and sadness. I see Fruitful Vine Ministry as a mission. A mission to return what has been stolen. It will take a lot of time, but I am determined, one man at a time  will have his joy given back to him.