The day my son, Travis, turned four I had scheduled an elders meeting at the church I was pastoring. I did something that is still embarrassing to write about. I postponed his birthday party until the next day so the elders’ meeting would not have to be rescheduled. Like I said, embarrassing. I vowed that day to never again do ministry at the expense of my family. In 2006 we moved south to pastor a large church with many responsibilities and burdens placed on me. My youngest son, Brett, had just undergone four months of chemotherapy for cancer and was emotionally vulnerable.

He needed me more than the church needed me.

On countless occasions I came home early from meetings and social gatherings during those first months, because my son asked me to come home and be with him. This might have cost me some collateral with the church, but I doubt anyone remembers their pastor leaving early to go home to his son. I do know my son remembers. We still talk about it.

In 1976 my parents left the mission field, unsure if they would ever return. Years earlier, in 1957, Mom and Dad departed from Europe, left family and all that is familiar, to obey the call of Jesus. Working with a primitive tribe in Papua (formerly, Irian Jaya), they assumed this specific call, to this place, would last a lifetime. They gave their lives to this call. Left everything for it. Jesus blessed their obedience, evident in the fruit that came from loving and serving the lost around them. Even though the four of us children were sent off to boarding school beginning at the age of six, we always felt we were a part of the call given to our parents.  Being separated was hard for us, and I know hard for them. 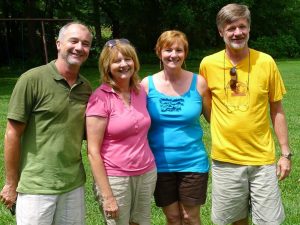 In 1976 my parents had a hard choice to make, although they will tell you there was no struggle about which was the right choice. One of their children was spiraling into deep depression, the sort that could have easily led to, and almost did lead to suicide. The choice was to leave the mission field to find help for their desperate son. The family spent two-and-a-half years in Georgia while that son received professional treatment. He gradually improved. For two-and-a-half years my parents wondered what they would do with their lives, and if they could ever return to do what they had given their lives to. Thankfully, in 1979 that son was declared healed. My parents returned to the mission field, served well, and served faithfully for a total of 38 years. They have been retired since 1996 and now live in Georgia.

I am that son, eternally grateful for parents who were willing to abandon their life call for the sake of family. I think they understand it to be part of the call to serve and follow Jesus.

Some might find this decision hard when placed against Jesus’ promise in Mark 10:29-30, “Truly, I say to you, there is no one who has left house or brothers or sisters or mother or father or children or lands, for my sake and for the gospel,  who will not receive a hundredfold now in this time, houses and brothers and sisters and mothers and children and lands, with persecutions, and in the age to come eternal life… At first glance this implies that ministry should come before family. Some, out of obedience to this command, have made the tough decision to remain faithful to ministry while not sure of what to do with a struggling child. As a child, I heard, from a few, this to be justification for sending off children so the parents could serve out their call. (I will brag on my parents here, and say they lived well with this tension, and despite the tough decisions they made, they left on us the deep impression that we came first. They certainly proved that when I was ill. So, a big shoutout here to Mom and Dad.)

I believe what Jesus is referring to in this passage is the kind of separation that was forced on families due to persecution, not the intentional willing sacrifice of children for the sake of following Jesus. Yes, Jesus does insist we place him above everything else, including family. Our love for family should not supersede our love for him. Love for family ought to never keep us from loving him. That was the dilemma presented to the rich man in this story whose wealth kept him from following Jesus. He was also afraid of being persecuted for it. He knew if he chose Jesus it might ultimately cost him everything he had. Even his family might be taken from him. Jesus is also reassuring the grieving mom who saw her children ripped from her as she and her husband were hauled off to prison because of their devotion to Jesus, that he will take care of them. He is telling the dad doubting his decision to not renounce Jesus now that he sees what it has done to his family, that it will be okay in the end. They were promised to receive so much more for their commitment to suffer loss for his sake. Read what follows in this passage, and Jesus speaks of his own pending suffering and even the inferred suffering that would follow for his disciples. No wonder verse thirty-two tells us how those who followed were afraid…They began to understand the cost. Notice, too, the reference to persecution in the passage cited above.

Yes, we are to give up our children to Jesus, but we are not to give them up to ministry. When we give our children to Jesus, he hands them back to us and says, “Here, raise them to love me. They are mine, and I am entrusting them to you.” For example, Moses’s mother had to give her son up to Pharaohs’ daughter, but then she was called to live in the palace to raise him. (Exodus 2:7-8) Before Samuel was born, she promised, if God gave her a son, to give him up to serve in the temple. (1 Samuel 1:22,28)  She kept her promise, but raised Samuel till he was twelve, and remained heavily involved in his life afterwards (1 Samuel 2:19). (I refer to Jewish custom and the account of Josephus who described 12 being the age when young boys were released- or weaned- to serve in the temple.)

Give your children to Jesus, and the way they understand they belong to Him is in knowing you placed them first above everything else you do in the name of Jesus.

Thanks Mom and Dad for not just teaching this, but showing it. You left a solid legacy that will last generations. It’s already showing fruit! Nine great-grandchildren, and counting, will be talking about you for generations to come.

I spoke with my Dad about this again the other day and he said something interesting. I asked my parents to read the draft for this blog and my father responded with this, “Mitch, it was no sacrifice to do this. No sacrifice at all. To not do it would have been the sacrifice and God did not look kindly in the Old Testament to the sacrifice of children.”

One thought on “Not Really A Sacrifice”