I discovered years ago that trusting God doesn’t mean you need to, or can understand what he is doing. Nor why. Just Trust Me are some of the most beautiful words I’ve ever heard him whisper when confused and mystified. Jesus told his disciples to trust* in God and trust also in me (John 14:1-2) at the very moment they expressed their fear of his leaving them. While he did give some glimpse of the future home awaiting them, and the promise that he would take them there, that was a long way off. It was not that promise that necessarily calmed their fears; it was the simple words, trust in me. In the following chapters Jesus had more to say about imminent persecution and hardship, and less about the good days that were right around the corner. The invitation to trust him settled more on fearful hea 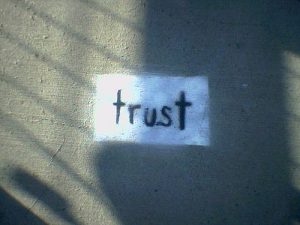 rts that looked forward to more hard days, not necessarily better days. In contrast to many of the promises made today, trusting God does not guarantee better days in this life. These all died in faith, not having received the things promised, but having seen them and greeted them from afar, and having acknowledged that they were strangers and exiles on the earth. (Hebrews 1:13).  The fact is, you and I trust him, while continuing to live in an uncertain world where the hope and promise of our new home is a long way off. Yes, I look forward to it, but it’s not what keeps me going. What keeps me going are those sweet words, trust me. By promising his disciples that he would prepare a place for them and then come back and take them to be with him, Jesus assured them that in the meantime, while he was gone and they remained here suffering, he was not going to forget or abandon them. The Holy Spirit was then given to them, and us, to give courage to live on in a hard world.

Even a cursory glance over Hebrews 11 provides a clear glimpse down the corridor of past saints who believed and trusted while never really knowing what it would give them in the immediate. Faith, by definition, is believing in something you don’t at that moment have sufficient and reasonable evidence to believe is really possible. That kind of faith just assumes that the object of our faith, Jesus himself, is big enough and loving enough, and committed enough to help us blindly move forward despite how hard it might get. And entering that faith path can actually take us into even rougher terrain. Faith again, empowers us to believe that Jesus has not forgotten us.

I fear the kind of faith espoused today promises an immediate response from God, not the kind that gives us courage to trudge on despite where it might take us, or how long we might have to linger. And so, many young and vulnerable believers end up disillusioned because God did not deliver as the preacher or Facebook post promised. Simply typing “amen” or “share this post” as a response to a clever ditty on Facebook doesn’t work in God’s economy. Faith, trusting, is a long-haul proposition that requires deep belief in the One who promised, and the ultimate reward of that faith is to live with him forever. The words, I will never leave you nor forsake you (Hebrews 13:5) were uttered by Jesus because he would leave them … for a time. He would leave them, but not forsake them. There lies the heartbeat of faith.

Because my parents were missionaries in what is now called Papua, I, along with my siblings, was sent off to boarding school at the age of six. Two things kept me going despite the long nights of crying, and the occasional sense of loneliness. I knew my parents still loved me; they would never forsake me, and I would see them again. And so faith provides us the same courage. He loves us so deeply and so profoundly, enough to trust us to be alone for a season, but not really alone. That keeps me going. I will go out on a limb here and even suggest that the sense, or feeling that Jesus is not near me, the sense of distance from him is a legitimate feeling. The promised Holy Spirit is given to reassure in the meantime  that Jesus has not at all abandoned us (even though he might at times seem far away) and the promised Holy Spirit is given to us, to dwell in us, to help us trust him when on our own we can’t. And finally, the promised Holy Spirit dwells in us to keep that promise alive, who according to Ephesians 1:14 is the guarantee of our inheritance until we acquire possession of it, to the praise of his glory.

Do those words, Trust Me, encourage you today? Remember he loves you enough to leave you alone for a season so your faith in him will be tested and stretched, and a day is coming when, finally, you will be home. 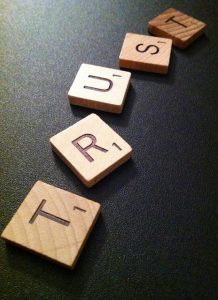 “Faith is not necessarily the power to make things the way we want them to be; it is the courage to face things as they are.” Ronald Dunn (When Heaven Is Silent)

*I use the word trust here, while most translations use the word believe. The Greek word is pisteuó which means to entrust, or believe in, or, to think to be true.