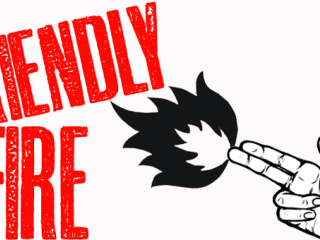 I talk to a lot of people who are trying to deal with conflict in their lives. I’ve come to the conclusion, following hundreds of conversations, that most conflict is unintended. In other words, I rarely meet people who are in conflict with each other because one morning he or she decided to say or do something to hurt someone else. Most of us all fall into conflict accidentally. Most conflict is the result of friendly fire. Knowing that my new adversary did not mean to hurt me can result in certain reconciliation. They did not wake up that morning and say, “Now how can I hurt Mitch?” Unless someone is downright malicious or evil, (and yes, they do exist even in the church) it is likely that the conflict was unintended.

When my wife responds in a hurtful way to something I said or did, I will remind her that I did not set out to hurt her. Somewhere in the process of acting and speaking, my words changed course and did what I never meant. It is rare, in fact, that I will say something to my wife, or anyone for that matter, where I meant harm. I believe the same is true for most of us.

One of the ways conflict is averted is when we harness our immediate and initial reactions before we respond. Let me break down into several steps ways in which we can avert friendly fire.

One of the exercises I have taken on, and now pass on to those I counsel, is to have a very quick conversation with myself when I am hurt by something someone else said or did. During this very rapid internal dialogue, I will inform myself that most likely the person did not mean what I interpreted them to have meant. I will assume the best of them until I have reason to believe otherwise. This choice serves to harness any unhealthy emotions and subsequent reaction that would logically follow. We are often too quick in responding to people, and I have discovered that once words spill out, they are as hard to put back into our mouths as it is to put toothpaste back into the tube. Most conflict results not from the initial action or words but from our reaction and the further reactions of others. It is usually our reaction to what we assume that becomes the sin in conflict.

I have also found it necessary in most conflict to carefully seek clarification as to someone’s intent before I respond to him or her. Again, unless someone is downright mean and ugly (and yes, again, they do exist even in the church – and I’ll talk about that in my next point) taking the time to clarify intent can avoid disaster in relationships. A helpful statement to make in determining true intent might be something like this: “I am not sure I heard you right. What you said hurt me, but I wonder if I might have misunderstood you. Could you say it again?” This graceful response allows the other person to understand the impact of his or her words. As a result, this first conversation can quickly clear the air between the two of you before there is ever the need for intervention and reconciliation.

When People Do Mean Harm

Now what do you do when people do mean you harm? In war, friendly fire happens when a solider unintentionally shoots one of his own. This was never meant to happen. It was a mistake, a costly mistake for sure, but no one planned for it. It happened. Firing at the enemy, though, is what war is all about. Again, there will be people in our lives, yes even in church and in your family, who do mean harm. They really do see you as the enemy, and they will do whatever they can to destroy you. You serve as a threat to them, and they will not rest until you’ve been defeated. In his helpful book, When Sheep Attack, Dennis Maynaird argues from his own research and personal experience that antagonists do mean harm. These are not well-intentioned dragons but wolves bent on causing pain. The young man in my previous church who said, “I could destroy this church if I wanted to,”really did mean it. And his actions proved it and set off a series of events that cost the church deeply and in time cost us our ministry there.

When Everyone Is Moved By the Holy Spirit

There is only one way to know if someone means harm or if what you experienced with them was simply, and yes possibly tragically, a matter of friendly fire. You will know by how they respond to your attempts at clarification and your subsequent desire for healing and reconciliation. I really believe that if two people are led by the Holy Spirit, and have that same Holy Spirit working in both hearts, there will be peace. There have been times where my efforts to reconcile created a deeper wedge. This person has become the enemy Jesus commanded me to love and to whom I am to turn the other cheek.

You have heard that it was said, ‘An eye for an eye and a tooth for a tooth.’ But I say to you, Do not resist the one who is evil. But if anyone slaps you on the right cheek, turn to him the other also. And if anyone would sue you and take your tunic, let him have your cloak as well. And if anyone forces you to go one mile, go with him two miles. Give to the one who begs from you, and do not refuse the one who would borrow from you (Matt. 5:38-42).

I want to encourage you to do several things when God places a difficult person in your path. I offer this with the belief that nothing God asks of us and places on our shoulders is accidental. I urge those I counsel to grow from conflict. To assume Jesus meant for this to show us more of ourselves so we can embrace more of Him. It is only then that we become so aware that this difficulties in relationships is part of what God is doing in carrying out his purposes. …for it is God who works in you, both to will and to work for his good pleasure (Phil. 2:13). It is in conflict that we are so reminded of what Jesus did to forgive us, that we are eager to extend that  to others. We were His enemy, but look what He still did. Forgive us our sins AS we forgive those who sin against us. Being forgiven and forgiving is the one smooth stroke in delivering the gospel to sinners.

An Example From Abraham Lincoln

The following article by Ken Sande of Peacemaker Ministries sums what we are discussing here perfectly.

“As the Civil War was coming to an end, it seemed inevitable that the North would prevail. President Lincoln had many discussions with administration “hardliners,” who hotly opposed his intention to be merciful and generous to the South. During one particularly heated conversation, one of those men rebuked Lincoln, saying that the North must “destroy their enemies.” Lincoln thought quietly for a few moments, then replied, “Have I not destroyed my enemies when I’ve made them my friends?”

That’s the greatest victory a peacemaker can claim: turning enemies into friends. That’s what Jesus did to me and you. Through his great personal sacrifice, he paid for our sins and opened the way for our complete forgiveness. He reconciled us to himself and initiated a relationship with us. Now, is there an enemy in your life whom God has given you the opportunity to “destroy” in a similar manner?” – Ken Sande (see link https://rw360.org/2018/01/29/detroy-your-enemies-2/)

“But I say to you who hear, Love your enemies, do good to those who hate you, bless those who curse you, pray for those who abuse you” (Luke 6:27-28).